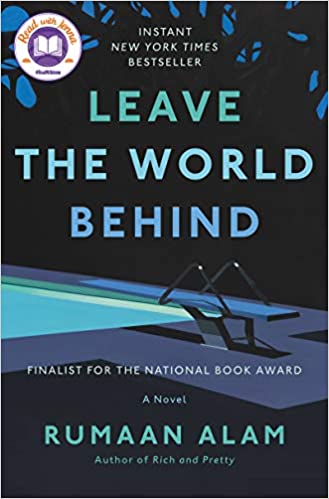 Former President Barack Obama recently placed "Leave the World Behind" on his summer reading list, although an accomplished black man in the book demeans himself before a "magical white" character seen as the model of competent American manhood.

While the book has a best-selling thriller's narrative drive and passages of splendid literary fiction, its series of set pieces don't coalesce. Several of the chapters misfire, and overall the novel doesn't live up to the extravagant praise it received.

A typical liberal family from Brooklyn heads to rural Long Island for a vacation at an Airbnb house with a swimming pool and up-to-date furnishings, but not that close to the beach.

The father, Clay, is a professor of media studies at City College, and the mom, Amanda, an advertising executive whose main duties are sending and answering e-mails. Their children are the teenaged Archie and 13-year-old Rose or Rosie.

After a day enjoying the pool, meals, a perfunctory trip to the beach and the parents' middle-aged lustful sex, they are disturbed by a late night knock on the door.

A black couple, in their 60s, George (GH) and Ruth Washington, announce that they own the house and have come from New York City, which has suffered a mysterious blackout. They desire to stay at the house until the disaster passes.

Their uneasy relationship slowly develops in scenes of varying credibility. Although the home's power remains, the Internet goes out, and they lose contact with the outside world, whose apocalyptic destruction is reported by an omniscient narrator who alternates with the characters' individual viewpoints.

G.H. is a successful financial planner, yet he emasculates himself before a white working class contractor named Danny, to whom G.H. has deferred in the remodeling of the house. Danny's dominance supports the validity of white supremacy.

As scenes of a global disaster mount, the book spins out of control. The most complex character, the young girl Rose, doesn't quite salvage the novel with a hopeful final chapter told from her point of view.

The book's cinematic qualities have been rewarded; it's being made into a Netflix movie starring Julia Roberts and Denzel Washington. Good casting; the novel mentions that G.H. resembles Denzel, although he lacks the actor's heroic fortitude.

Streaming offers possibilities; the book is really a TV show with a series of not quite coherent episodes.