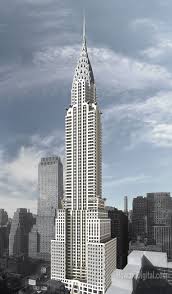 One of my favorite moments of a trip to New York City is standing at Bryant Park behind the Fifth Avenue Library and gazing up 42nd Street at the Chrysler spire. When I see it lit by sun, or breaking toward swirling clouds, I hear Gershwin and Rodgers and Hart.

Opened in 1930 as the world's tallest building until the Empire State Building topped it in 1931, the Art Deco Chrysler Building expresses Manhattan's style and glamour. While the Empire State's spire and the Woolworth Building's elegance also excite me, Walter Crysler's monument, designed by William Van Alen, stands above them as the New York skyline's defining architectural statement.

Now the Chrysler Building is for sale by its owners, an Abu Dhabi investment firm and Tishman Speyer. While relegated to a brief by The New York Times, the news merited an imaginative front-page display and Keiko Morris' informative article in The Wall Street Journal.

Perhaps a billionaire like Jeff Bezos, if he has enough money left after divorcing his wife, MacKenzie, will buy the Chrysler for its iconic status and give the old dame the love she deserves.

Along with the Statue of Liberty, the Fifth Avenue Library, the Empire State and Grand Central Station, the Chrysler Building defines New York's energy and beauty.