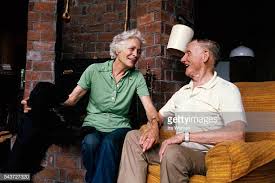 Proud of his Southern heritage although raised in the border state of Kentucky, Warren contributed to the New Agrarian manifesto "I'll Take My Stand," then moved away from the group's intense regional conservatism, or, as their critics claimed, reactionary Confederate romanticism.

In contrast, Clark was proud of her Connecticut Yankee heritage. Part of the radical leftist Partisan Review crowd in her youth, Clark also grew away from her early solipistic theories.

While they came from different worlds, the couple both grew up in small towns, surrounded by older storytellers who presented them their recollections of a vanished 19th century America.

Finding happiness as writers working from their homes in rural Connecticut and Vermont, and raising two children, the sculptor Gabriel Warren and the poet and essayist Rosanna Warren, Warren and Clark enjoyed a successful marriage built on trust and affection, along with sparks of conflict.

Fond of travel to Europe, and steeped in history - one of Clark's masterpieces is the non-fiction "Rome and a Villa" - the couple in their gracious rural lives of reading, writing and reflection blended Old World values with those of American democracy.

Steve Oney as a 25-year-old working for the old Atlanta Journal-Constitution Sunday magazine visited Warren and Clark at their home in rural Vermont and wrote a vivid portrait of them and their warm, humor-tinged marriage. The 1979 profile is included in Oney's outstanding collection "A Man's World."

In his introduction to the 2017 book, Oney recalls that Warren gave him a  lifelong credo: "It may be said that our lives are our supreme fiction."

(Here is a Southern Bookman interview with Oney after the publication of "A Man's World" by Mercer University Press.

And here is a Southern Bookman interview with Warren and Clark's daughter, Rosanna.)

Warren and Clark also come alive in critic and writer Jay Parini 's 1978 interview with the couple for one of the first issues of the New England Review, now celebrating its 40th anniversary. A co-founder of the literary journal, Parini, the biographer of Robert Frost, visited Warren, Clark and family along with Syndey Lea and Robin Barone.

The interview shows Warren and Clark's affection, humor and subtle rivalry with each other. As with Oney's piece, the reader feels as if he or she is participating in the visit.

Clark and Warren's concerns about art, culture and the loss of individuality and community remain pressing today. Such civilized reflection seems in short supply, unfortunately.

My occasional research on Eunice Clark Jessup (1911-1987), Eleanor Clark's older sister (and my landlady, January-June 1987, in Wilton, Connecticut), led me several months ago to that delightful interview with Eleanor and Robert.

I forwarded it to the editors of The Times Literary Supplement in reply to a recent "NB" column in the issue for May 21, 2021.

The columnist M.C. (Assistant Editor Michael Caines) has kindly a paragraph on it in "NB" for June 18, 2021: