Nashville's Past and Future

Early Sunday morning, the last drinkers have left the honky tonks on Nashville's Broadway. The brisk cool wind, a surprise for mid-May, blows down the slow-waking street. From noon to long past midnight, country songs blare from the neon-lit bars, but now the street is quiet. A helicopter churns above in the perfect blue sky, bearing a Regions Bank sign that will be slowly swung down and placed atop one of the skyscrapers that surround the old pleasure-dedicated buildings along the strip. Outside Legends and Tootsies, grizzled bar keeps wash down the sidewalks with hoses, their voices husky and cheerful, their seen it all eyes open to another day.

Because of the danger posed by the sign possibly falling from the chopper, Broadway has been barricaded, although the policemen talking and laughing while standing beside a cruiser parked on Fourth Avenue don't pay any attention to me walking in the middle of the street and down the sidewalks. They don't look my way when I stop to take photos with my IPhone. I snap pictures of the RCA Victor dog in the window of the Ernest Tubb Record Store, old Ernest himself, Gene Autry in another window, the sign of the Paradise Park Trailer Resort bar. Looking inside the closed Ernest Tubb store, I see the stage with its mike stands, amps, piano and drums - years ago I listened to the Ernest Tubb midnight jamboree when it came on after the Opry over WSM clear channel radio.

One or two unbalanced looking street people greet each other at the Nashville Convention Center at Fifth and Broadway, just across from the Ryman Auditorium, country music's mother church. They both wear new looking lace up military style work boots. The black one asks me if I can help him, then shakes his head and retreats before I can even respond, muttering "I was just mess in' with you."

I walk down Fifth past the alley separating the Ryman from the back of Tootsies and other Broadway dives. Hank Williams and other Grand Old Opry performers used to cross the alley to grab quick drinks between shows. Hank did it too many times I guess - the Opry fired him for drinking. Seeing the narrow space, I imagine him there, playing his old Martin and working on a song. The Ryman, with its handsome brick facade and stained glass rainbow colored windows, is one of those places where you feel the presence of ghosts.

Back on Broadway, I look down the street's long vista, where church steeples rise into the air. Sin and redemption co-exist in Nashville as in country music. Standing in the nexus of past, present and future, I think of Peter Taylor's stories and those that will be written by new generations. 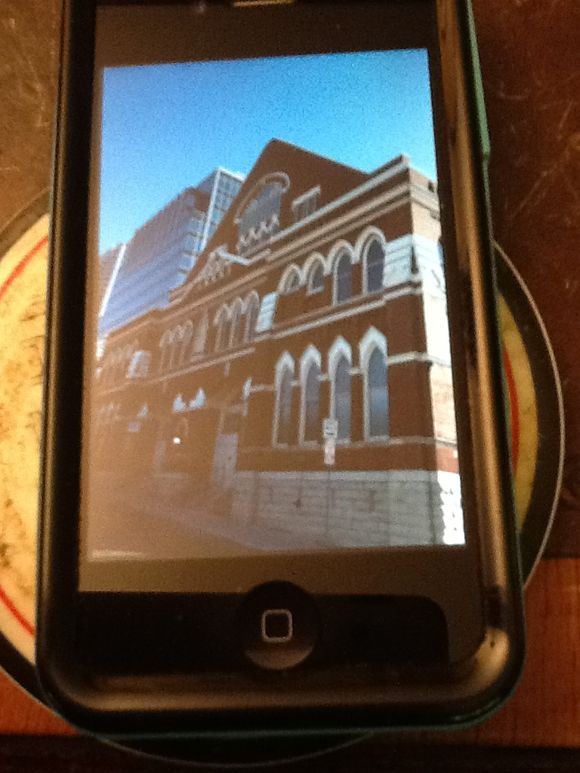