Hail to the Sewanee Review

While disappointed on Memorial Day not to find the London Review of Books at the Peach Barnes & Noble, I was happy at the arrival of the Sewanee Review's spring issue.

The venerable Sewanee Review is one of the recurring pleasures of my reading life, although its poems are old-fashioned, even archaic, its short-stories musty and its prose pieces tilted toward reminisces of the hunting lodge and old South parlors.

The review offers a traditional literary integrity that speaks to the Walker Percy-Faulkner Last Gentleman side of me. The review's blue cover sans illustrations has held to the same format since its beginnings in the 1890s, with only the printed list of writers, the yearly seasons, volume number and of course price changing. George Core has edited the review for many years at its office at the University of the South, where I attended two Sewanee Writers Conferences.

Each of its quarterly issues is based on a theme, and for spring 2013 it's Poetry and the Critical Eye. Henry Hart compares Allen Tate's "For the Confederate Dead" and Robert Lowell's "For the Union Dead." The review contains its usual feast of offerings, from poems, a story by T. Alan Broughton, essays and pieces divided into the review's signature "the state of letters" and "arts and letters" sections.

With the range of newsstand publications shrinking, I'm always encouraged at the Sewanee Review's appearance. The absence of the London Review is worrisome; I hope it means that the latest issue sold out before I could get a copy. The review's arrival from London has about a two-week lag.

I always worry that the London Review will disappear from the B&N, because the store a few years ago carried the Times Literary Supplement for a few months, then discontinued it when sales were poor, despite my TLS purchases. Perhaps the London Review has built a following in Buckhead, as unlikely as that seems.

Of course, I could subscribe to the London Review, TLS and Sewanee Review and not worry about the B&N deciding to devote more space to another celebrity or home decorating magazine. But I enjoy the newsstand experience. 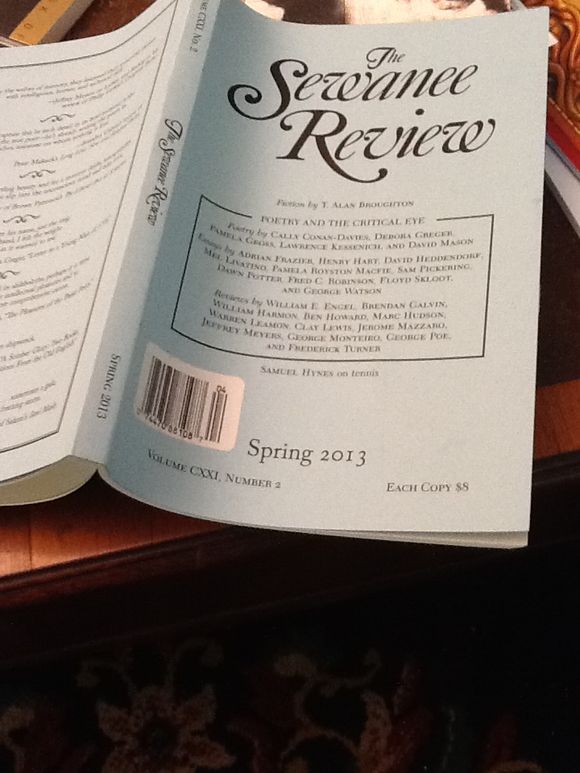