"On the Road" Film Out of Gas

Add Jack Kerouac's "On the Road" to the list of American novels that result in disappointing movies. I'd read negative reviews of Walter Salles' film, but decided to give it a go when it showed up on the Comcast On Demand menu at the same time it's still in theaters (which can be a sign of a flop).

The movie is even worse than the reviews. I was going to give a detailed condemnation but decided not to waste the words. Suffice it to say that the most interesting part of the movie are the cactuses in one visually gorgeous shot.

Will the newest " Great Gatsby" succeed where other films of the novel have failed? We wish it luck, although I have my doubts about Leo as Jay. Too short.

John McPhee in this week's New Yorker continues his primers for writers, discussing how he goes through several drafts before giving his articles and books that trademark polish. His confession of despair, turmoil and frustration in producing the all-important first draft offers encouragement to struggling scribes.

For grammar nerds, McPhee's piece devolves into a discussion of such points as when which can be used to modify a restrictive clause. He affectionately recounts tussles with the New Yorker's formidable copy desk, giving tribute to the magazine's longtime grammarian, Eleanor Gould, whose name lives on when copy editors "Gould" a proof. McPhee's piece brought an amusing follow up from copy editor Mary Norris on the New Yorker's web site about why the magazine spells traveler traveller.

...The Wall Street Journal today had a charming piece about sax player Sonny Rollins. I was amused at Rollins's (New Yorker style, as McPhee discusses) comment that at age 81, he has less energy for practice, often playing his instrument for just three hours. Three hours! I'm lucky to last for 30 minutes at the piano.

...Farewell to George Jones, one of America's great originals. A distinctive voice and a wild character.

Nine letters written by J.D. Salinger in the early 1940s to a young woman in Toronto have been purchased by the Morgan Library in New York, The New York Times reported this week.

The letters reveal a breezy, flirty, gossipy young man, not yet darkened by his World War II combat. He mentions the New Yorker buying a short story featuring a young character named Holden Caulfield. The story, "A Small Rebellion Off Madison," was not published until after the war. The Times quotes Salinger as saying the magazine expressed its interest in other stories about the disaffected young boy. For whatever reason, Holden remained in his imagination, at last culminating in the classic "A Catcher in The Rye."

Salinger, who fought extensively in Europe, including D-Day and the Battle of the Bulge, suffered severe mental trauma and eventually made himself a recluse toward the end of his life. "For Esme With Love and Squalor," perhaps his finest achievement, tells of a young soldier's correspondence with a young woman, starting with light-hearted letters before the experience of combat and ending with war-haunted letters outlining the soldier's severe emotional collapse.

"Esme" was based on his letters to another young woman, not his Toronto pen pal, who's still alive and in her 90s. But the newly discovered letters reveal the same exuberant joy of living whose loss is registered in "Esme." The new letters show Salinger's love of slang and colloquial speech. That wit and gift for the vernacular lived on in "The Catcher in the Rye," "Nine Stories," "Franny and Zoey" and " Raise High the Roof Beams Carpenters." Along with his fresh American language, the deepening of his tragic sense because of the war made him one of our great writers, despite his small body of works.

Of Libraries and Parades

I recently read a piece by someone named Rod Dreher about returning to live in St. Francisville, La., after years in Washington or New York City. I believe Dreher, an LSU alum, is one of those conservative writers I usually can't stomach. The piece on returning home was OK, if overwrought.

He made one point with which I wanted to take issue, saying that he returned to Louisiana although it's a place that devotes more resources to parades than libraries.

The reason this struck me is that I've been amazed at how my hometown of Baton Rouge has succumbed to celebrating Mardi Gras in the 40 years or so since I left. When I was growing up, Baton Rouge all but ignored Mardi Gras. To see a parade, you had to travel 80 miles down the Mississippi River to New Orleans.

Baton Rouge in those days devoted hardly anything to parades. But the libraries were fine. One of my fondest childhood memories was our frequent summertime visits to the East Baton Rouge Parish Bookmobile that parked on a scalding concrete lot on Hyacinth Street in Southdowns. How nice to escape the blazing heat and climb the steps into the bookmobile's air conditioning and books stacked high on shelves. I always left with 10 books or so.

I don't care one way or another that Baton Rouge now has several Mardi Gras parades. For all I know, the bookmobiles are no more. But the city still cares about libraries; I've read in Baton Rouge's soon to be sold newspaper about plans for a new central library.

Every decade or so with the publication of a new James Salter book, the literary chatterers start chattering about how Salter is our best undiscovered writer and a writer's writer, blah, blah, blah. Salter's made quite a handsome career out of this attention. Now, at 87, he has a new novel out, "All That Is," and the amen chorus is in full voice. I've seen a couple of profiles, including one in the New Yorker, and reviews that claim Salter fashions the finest sentences - exquisite nouns, verbs, direct objects! - in the English tongue.

Perhaps I'll give Salter another try, but only if I can obtain "All That Is" for free or at a heavy discount. His other books, including "Light Years," could have used a bit of Elmore Leonard's advice to authors to not write sentences that sound too much like writing.

For years, I've enjoyed reading the Pushcart Prize Best of the Small Presses anthology, so was tickled to come across the 37th edition. While Bill Henderson's project boosts of its grass-roots authenticity, it's gained over the years some institutional pomposity; the collection is slickly published, along with the volume number in Roman numerals, à la the Super Bowl. Henderson's introduction espousing the literary virtues of the pieces gleaned from the nation's small publishing entrepreneurs has a smug, self-congratulatory quality.

Indeed, the contents are uneven, especially the poetry, chosen by Bob Hicok and Maxine Kumin. Hicok and Kumin talk like battle heroes of choosing from hundreds and hundreds of poems, which is scary, since the poems I've encountered so far strike me as amateurish, overwrought, poorly considered, and unfinished. A typically sentimental and banal Ted Kooser poem made the most of an impression. Henderson points to a poem by a fourth grader. Perhaps it will raise the intellectual and artistic level.

On the prose side, the most notable piece so far is one of Marilynne Robinson's mind-stretching essays, "On Beauty." The late Harry Crews shows the best of his macho style with a memoir fragment. I started but grew bored with a short story by Karen Russell, the new it girl of short stories a few months ago. I've liked Laura Kasischke's poems, but her short story reprinted in the anthology, "The Barge," strikes me as something a talented high school girl would produce. While discovering some new voices, the anthology has its share of familiar names such as Joyce Carol Oates, Wendell Berry, Jane Hirshfield, Andrew Huggins, and Adam Zagajewski.

I'll keep browsing; surely a jewel or two will be found. 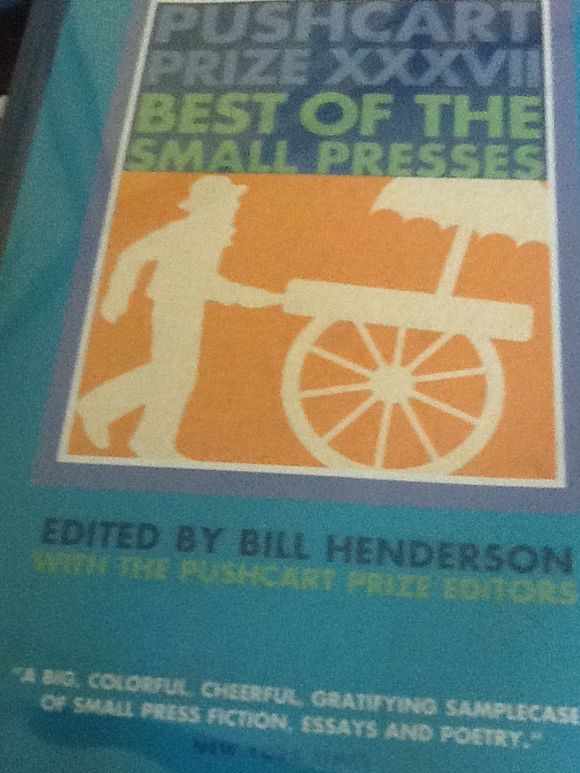 A robin arrives and perches on the dogwood tree in our front yard, a gift for the birth of our youngest daughter more than 20 years ago. It's a splendid mid-April Saturday morning, unexpectedly cool after a rainy Friday filled with news of the Boston manhunt and capture of the young boy turned bomber. The robin's presence makes all of that temporary, speaking for enduring joy, love, art.

Yes, I'm thinking again of Keats and his miraculous creative spring in 1819. The robin recalls Keats' nightingale, which built its nest outside the poet's home in Hampstead and inspired "Ode to a Nightingale," one of the poems I can never stop reading.

A young man who decides to plant bombs and kill. Another, all those years ago, who wrote in a second great ode, "Beauty Is Truth, Truth Beauty."

Susan Faludi, one of the many immensely talented journalists run off by the good ole boy rednecks who ran the AJC during my first years there, has a fascinating piece in the April 15 New Yorker about the radical feminist writer and activist Shulamith Firestone. I'd never heard of Firestone, and Faludi's piece delivered the pleasures of discovery with every paragraph. She also gives an engrossing look at the second wave of feminism in New York's Lower East Side in the early 1970s.

Firestone struggled through her sadly short life to overcome her father's oppressive Orthodox Judiasm, according to Faludi. She eventually succumbed to schizophrenia. Faludi seems to imply a connection between Firestone's feminist zeal and her mental illness, which specialists likely would question. Several ground-breaking feminists eventually suffered ostracism from the groups they founded, and Faludi traces the depression and other problems they suffered.

The piece reads like a book excerpt, and I hope that's the case. I've always loved books about radical politics, and avant garde writers and artists in New York and elsewhere, a strange taste for a good ole boy like me. I hope that Faludi is coming out with a book on Firestone and her times.

"The Richard Burton Diaries" prove that immense talent, attractiveness, fame and wealth don't bring happiness. A lover of books and the theater, Burton in the diaries he kept intermittently throughout his life shows himself a skilled writer - he published a number of articles without recourse to a ghost.

The diaries detail his life with Elizabeth Taylor and friendships and affairs with actors, directors and writers. Touchingly, they begin in his Welsh schoolboy days and last through his first acting triumphs into his drift into celebrity and mediocre films. Even such a famous life grows mundane. What's striking are his guilt and self-loathing at bad moods, heavy drinking and sleeping too late. A violated Puritan conscience rages.

I browsed through Burton's diaries soon after reading William Styron's Selected Letters. Letters are like diaries; both intimate, informal, revelatory. A letter to a close friend is like a shared diary entry; a diary entry is a letter to the self.

Neither man mentions meeting the other, but they have much in common. Both are talented men who rose from meager backgrounds to immense fame and acclaim. Both celebrate and despise their success. Sadly, their hyper masculinity conflicts with their sensitivity and creativity. That division brought forth for both of them great art and great pain. 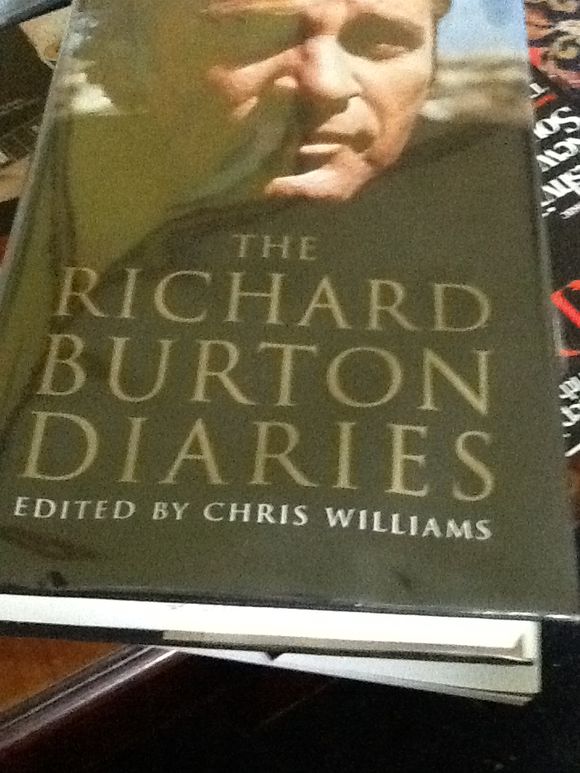 Boston in Freedom and Sorrow

Boston is one of the handful of cities to which I feel citizenship. These are cities where where I've spent significant time, whose places I know, where I have poignant memories.

The marathon bombs blew up near the Boston Public Library, which stands for the free exchange of ideas. Boston's history, to which April 15, 2013, is now added, is packed with reminders that freedom often rises from violent conflict.

I think again of St. Gaudens' monument in the Boston Common to the black union regiment killed in the Civil War, and Robert Lowell's "For the Union Dead." After Sept. 11, the country lost much of its freedom. Despite the pain and horror of this, may Boston hold onto its free, walkable spirit.